the most beautiful reefs, almost on your doorstep... 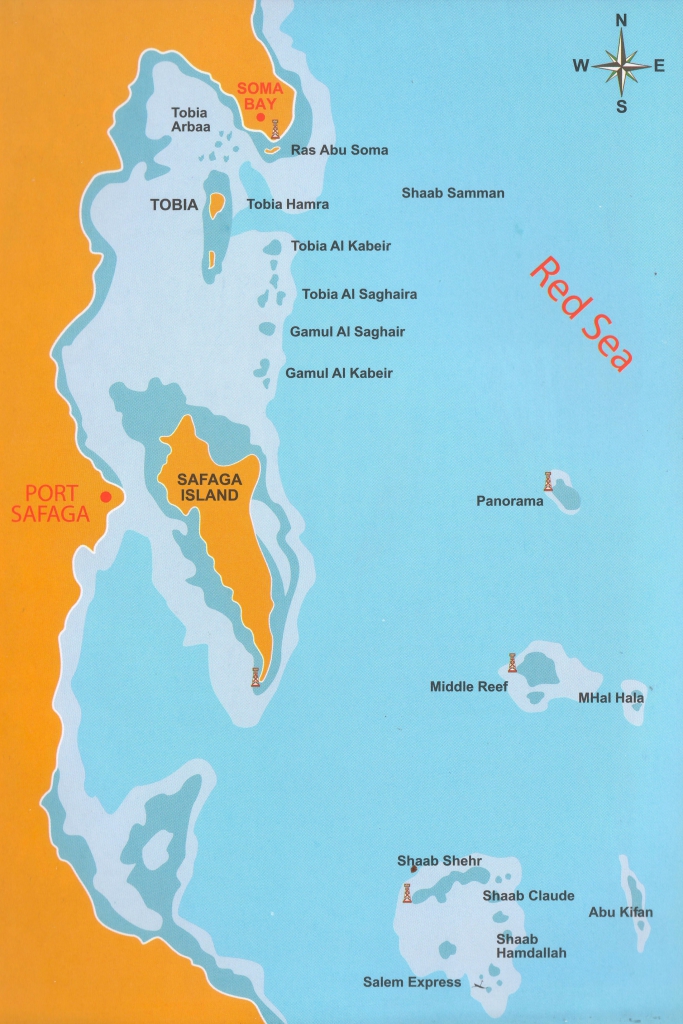 Most of the best dives in the area are at the spectacular offshore reefs and wall dive sites of Panorama, Middle Reef and Abu Kafan. Lush corals cover walls that drop hundreds of feet onto the sea bed. Breathtaking landscapes formed by hard corals offer dives between underwater labyrinths, marine life is abundant with everything from the smallest snail to huge amounts of reef fish, barracudas and reef sharks.
The wind and currents can be great here. For divers, this means some of the more exciting sites are sometimes not on the menu. Fortunately, Safaga also offers a wealth of nearby sheltered reefs and shallow coral gardens that are perfect for beginner divers and changeable weather.
Safaga also offers the controversial wreck of the Salem Express. 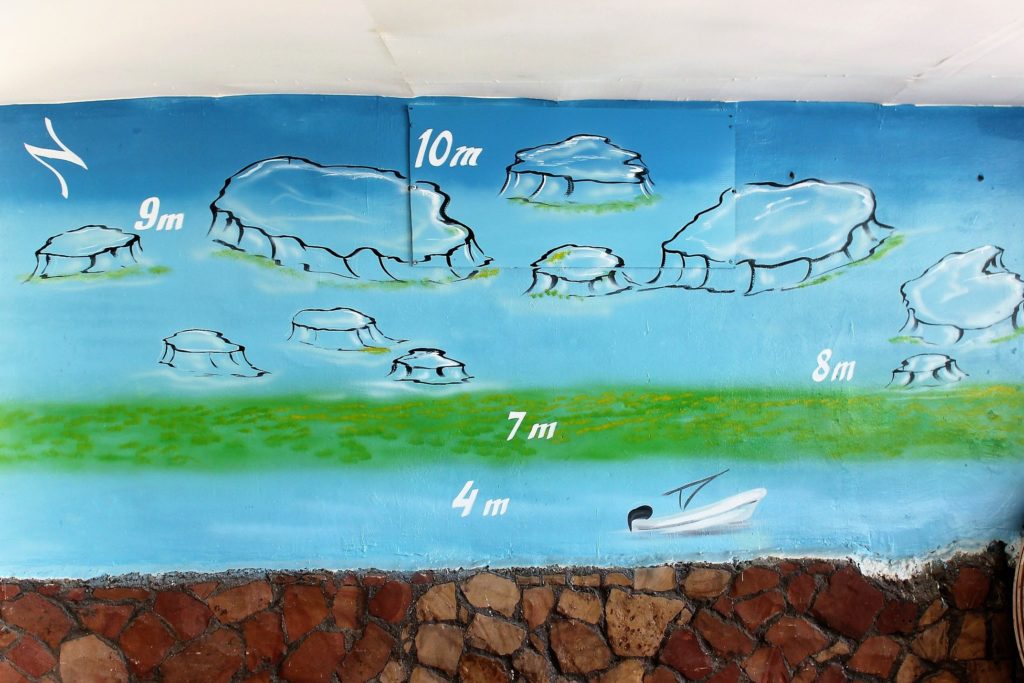 Nemo Dive Club & Hotel is happy with its own house reef that is ideal for (macro) photographers and that we also use for training. It is also an ideal place for night diving. It is full of life; you can find turtles, but also, emperor fish, barracudas, guitar rays, big bass, slugs and much more. At any time, you can put on your gear to go for a swim right from the beach. Swimming over the seagrass to the actual house reef, you should definitely look out for the seahorses that hide here. The depth is a maximum of 15 meters. Can you imagine a more relaxed diving holiday? 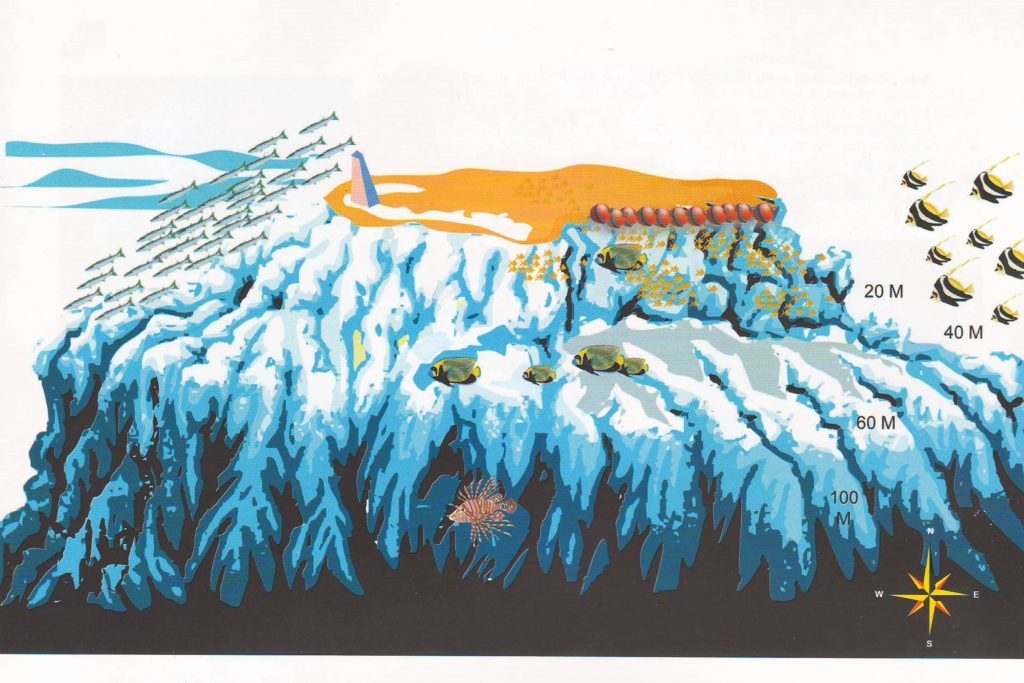 On the north side is a plateau at a depth of 25 meters with beautiful fan corals and beautiful table corals from Acropora. Keep an eye into the blue: kingfish, tuna, barracuda are often present. You can also meet the “caretaker” of Panorama, a very curious Napoleon. At 27 meters, a crack in the rock with giant fan corals and a school of glass fish has its hiding place here. Stingrays, blue-spotted stingrays, lionfish and moray eels live on the plateau. During your safety stop you can linger over Anemone City.

On the south plateau you are practically guaranteed to see several Napoleon wrasse. It is especially pleasant that there are many young fish. Pelagic species such as tuna visit from time to time, and other predators such as bigeye trevally and barracudas hunt in large schools of fusilier. Eagle rays, manta rays, white tip reef sharks, gray sharks, silky sharks, and even oceanic white tips have been spotted here. 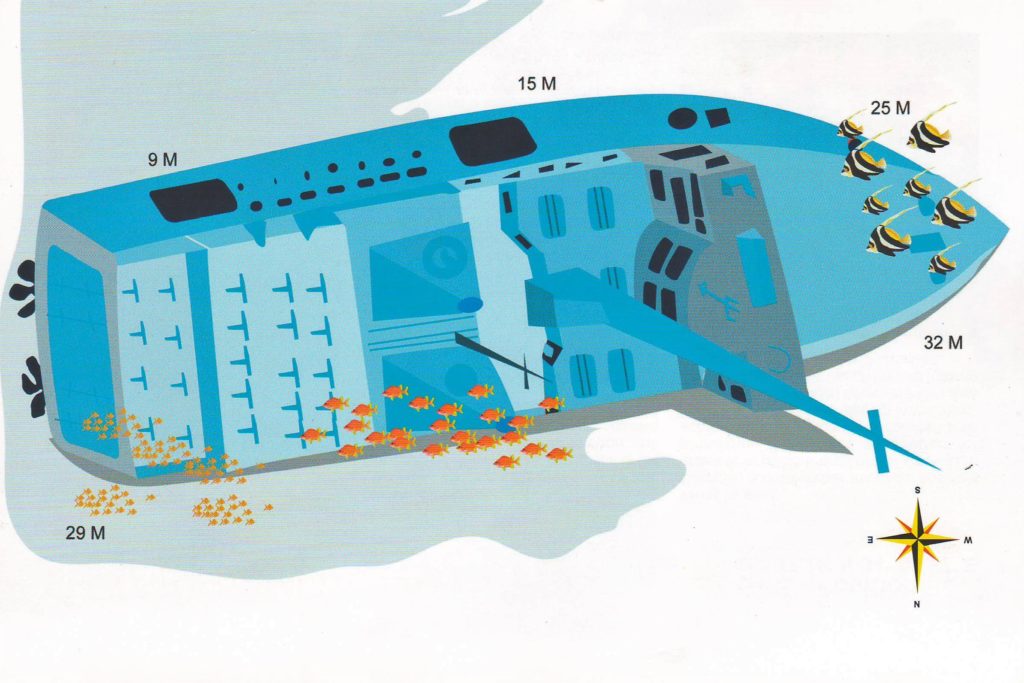 Built and launched as the Fred Scamaroni in France in 1964, this passenger ferry was later sold on the Samatour line and renamed the Salem Express. On December 15, 1991, she hit the Hyndeman Reef and ripped a huge hole in the hull. The impact of the shock caused the loading doors to open, water poured in, and the boat sank in 20 minutes. According to official reports, there were 960 pilgrims returning from Mecca on board, but it is claimed that up to 1600 people were actually on board. Only 180 people survived the tragedy.
This is a maritime grave and should be treated as such. Dive her with respect. The wreck lies at a depth between 12m and 30m. She has a length of 115 meters and lies on her starboard side. 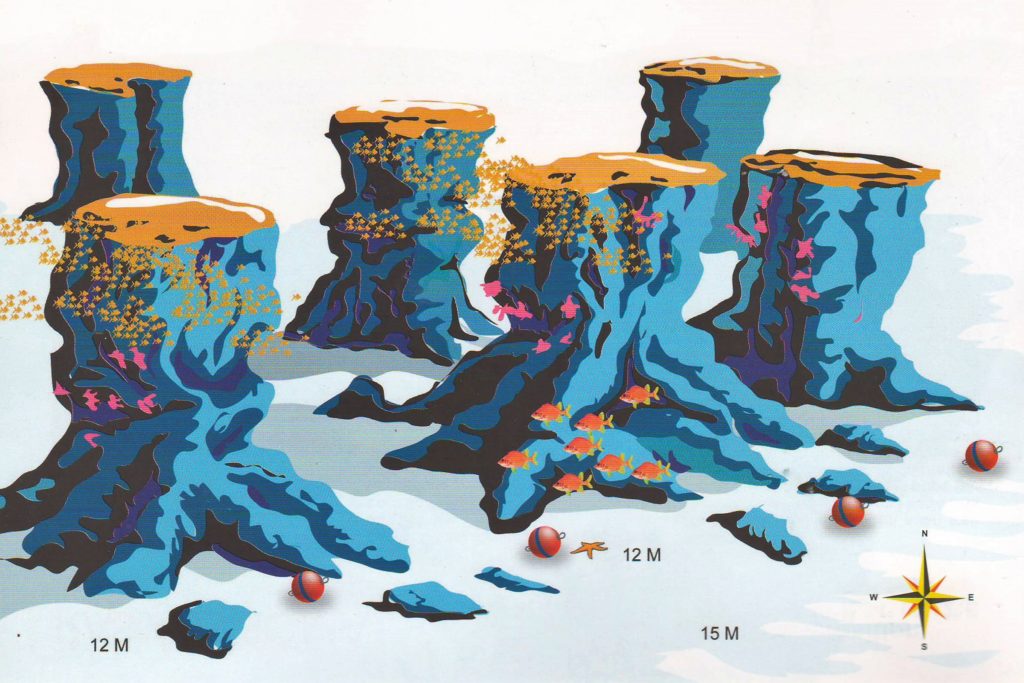 Tobia Arba also called “The 7 Pillars” is a set of blocks at a depth of 12 meters arranged from east to west in four rows. You can easily dive from one column to another without searching. The pillars are lined with soft corals and a pleasant place for fish such as the scorpion fish, crocodile fish and many more. Octopus, moray eel, open water eel, shellfish, sea urchin, starfish and Spanish dancers are also in play, not to mention the feather stars. A magical performance. 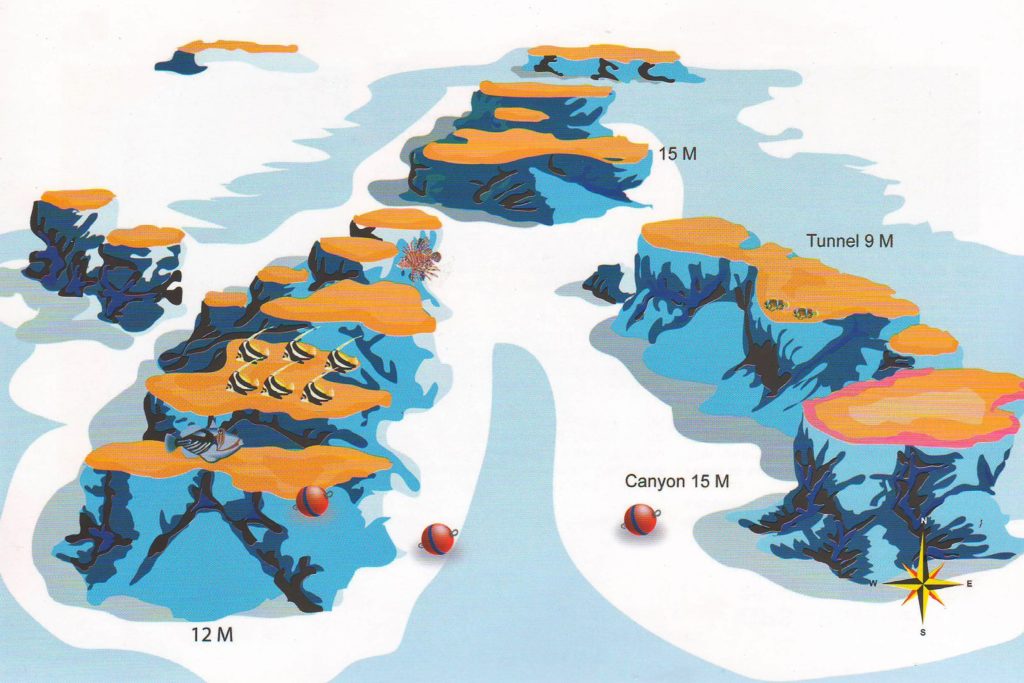 Bordering Safaga Bay the reef made up of a series of coral and massive pillars. On the sandy bottom at a depth of 12-15 meters you will discover hidden stingrays, clown fish, anemones, butterfly fish, puffer fish, crocodile fish, scorpion fish … If your time and air allow it, you can stop by for a manicure at one of the many cleaning stations . 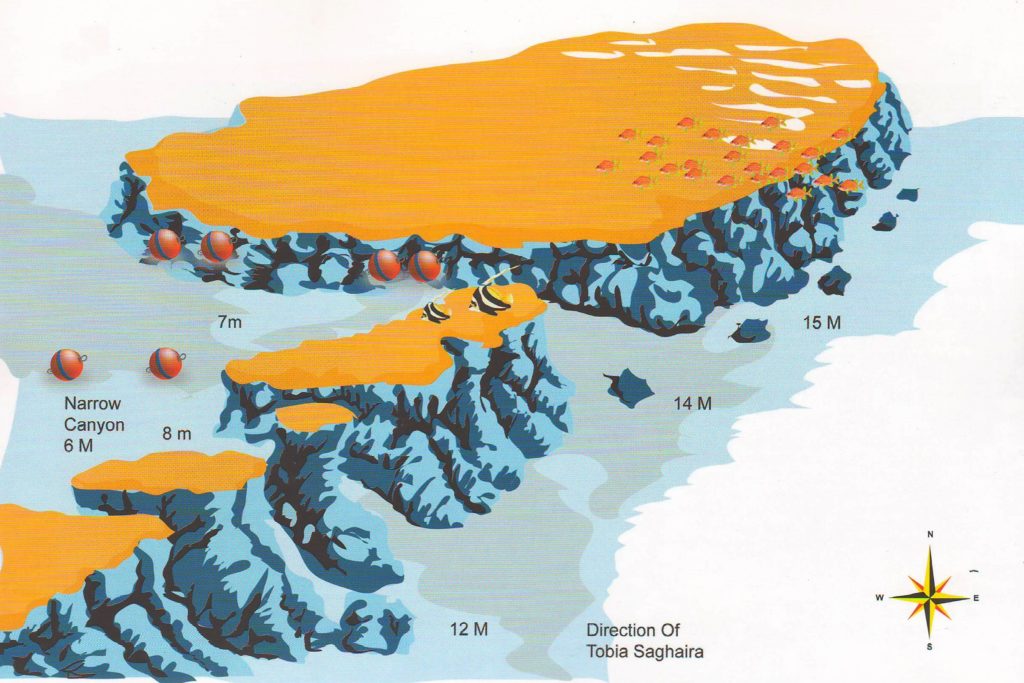 The eastern wall of the main reef is an explosion of the best marine life the Red Sea has to offer and some beautiful corals. You will find bass, doctor fish, unicorn fish and anemones full of clownfish. On the sandy bottom at the edge of the reef you will find blue spotted rays and flatfish such as the Moses tongue. The pinnacles in the south have cracks and holes where glass fish hide from hungry lionfish and jackfish. Triggerfish patrol the bottom and dolphins sometimes pass by in summer. 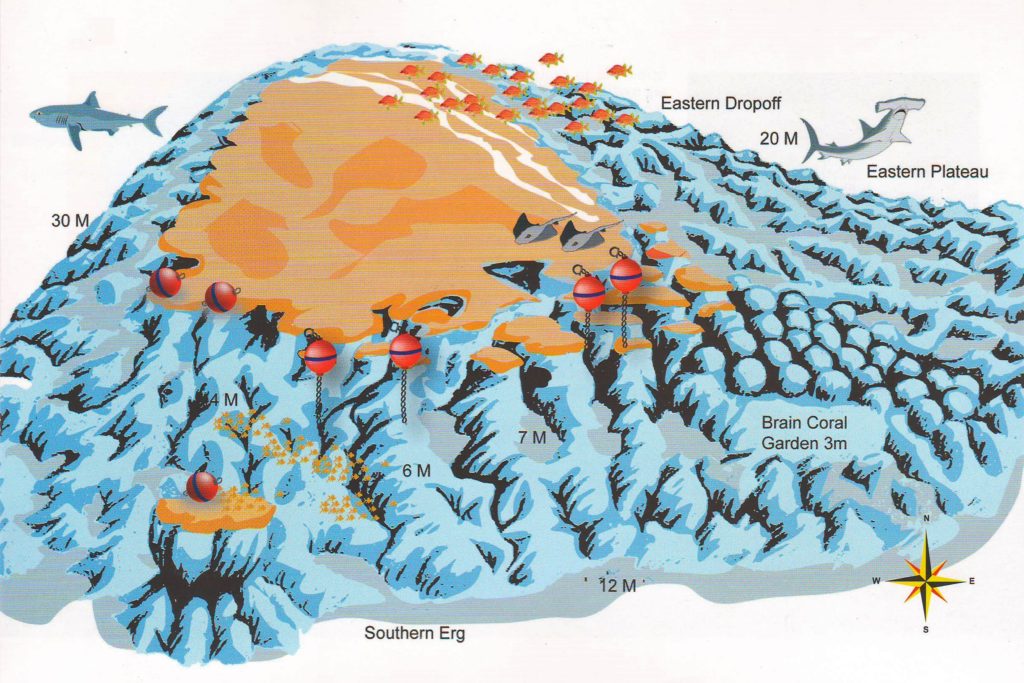 The reef has a huge sandy area in the south, a wide shelf on the east and west sides, plus a generous plateau in the north that describes the typical Red Sea offshore reef. Drift diving, with the prospect of seeing large predators, can be done on either side. Ending the dive in the coral garden makes a wonderful safety stop.
This is a classic paradise of the Red Sea. Large brain corals lie in the coral garden, soft corals and gorgonias grow on the reef side, along with an abundance of macro life. Small reef fish such as anthias and butterfly fish, schools of fish such as snappers and sweetlips, and large predators such as sharks and barracudas are all represented here. 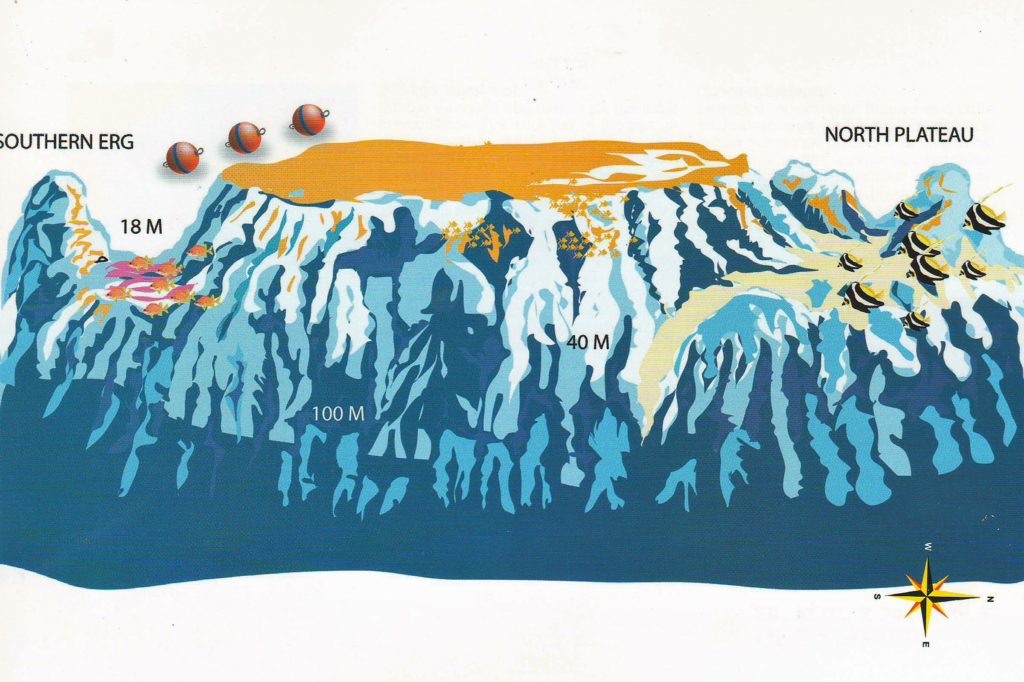 The site is also known as The Deep One. Abu Kifan can be described as a minor version of Elphinstone. This long, narrow reef stretches from north to south through slender plateaus and is one of the most famous wall dives in the Red Sea.
Schools of bannerfish and sweetlips are fighting the current. You can see large groups of giant barracudas in the open water. Hundreds of bright red common bigeye fish gather across the plains of the plateau. This, along with beautiful black corals, soft corals and gorgonias, plus the fact that you can find a good angle at any time of the day, makes this dive site extremely popular with underwater photographers. 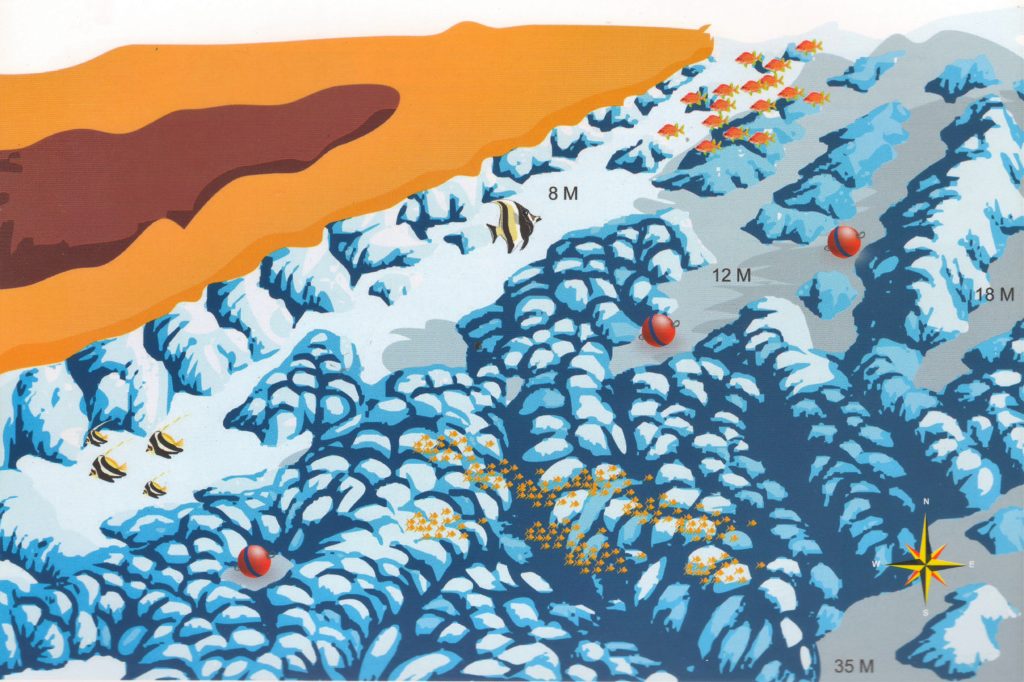 This is an obvious morning dive as the entire dive site faces east. The shallow part of this site is like a maze of ledges and canyons.
Turtles are a fairly familiar sight here, as are Napoleon wrasse and moray eels. You will find the usual inhabitants such as butterfly fish, angelfish and emperor fish around the reef, but also stone fish and Red Sea walkman. Jackfish and barracuda sometimes come here to hunt, and zebra sharks have been seen resting on the sandy plains. 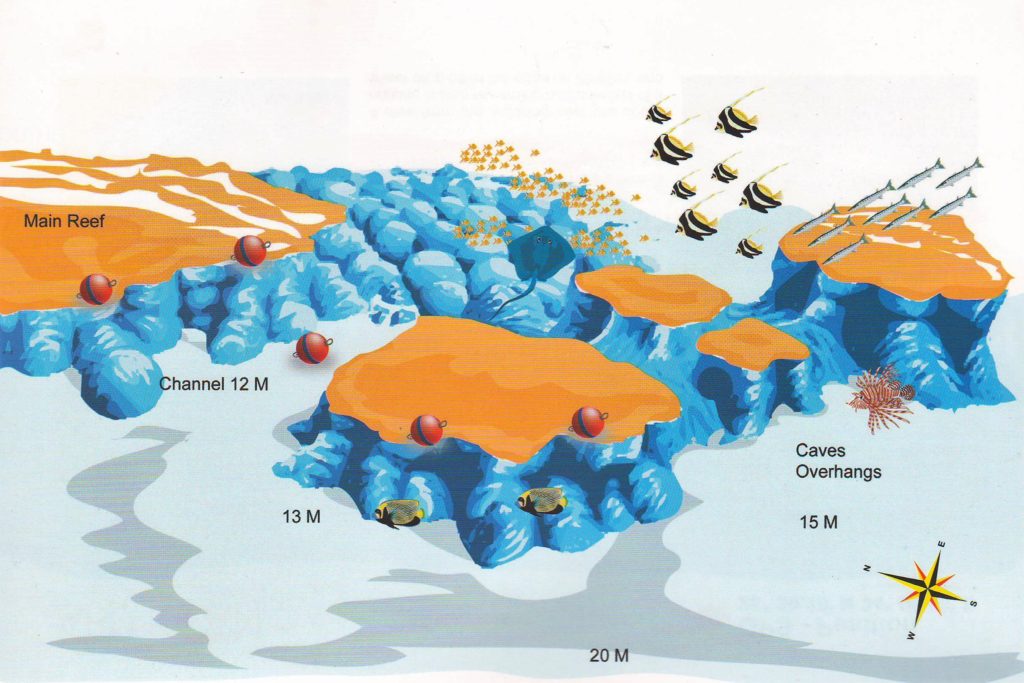 This site is also known as Hyndeman Reef. A 1 km long boomerang-shaped reef that runs from east to west, flowering coral gardens and columns that emerge from the seabed.
Triggerfish, wrasse, parrotfish and surgeonfish patrol the reef. Emperor fish, flag fish and sweetlips hang in schools and pose for photos with canyons in the pinnacles as background. Barracuda and jackfish are often seen, as are tuna and even whitetip sharks. 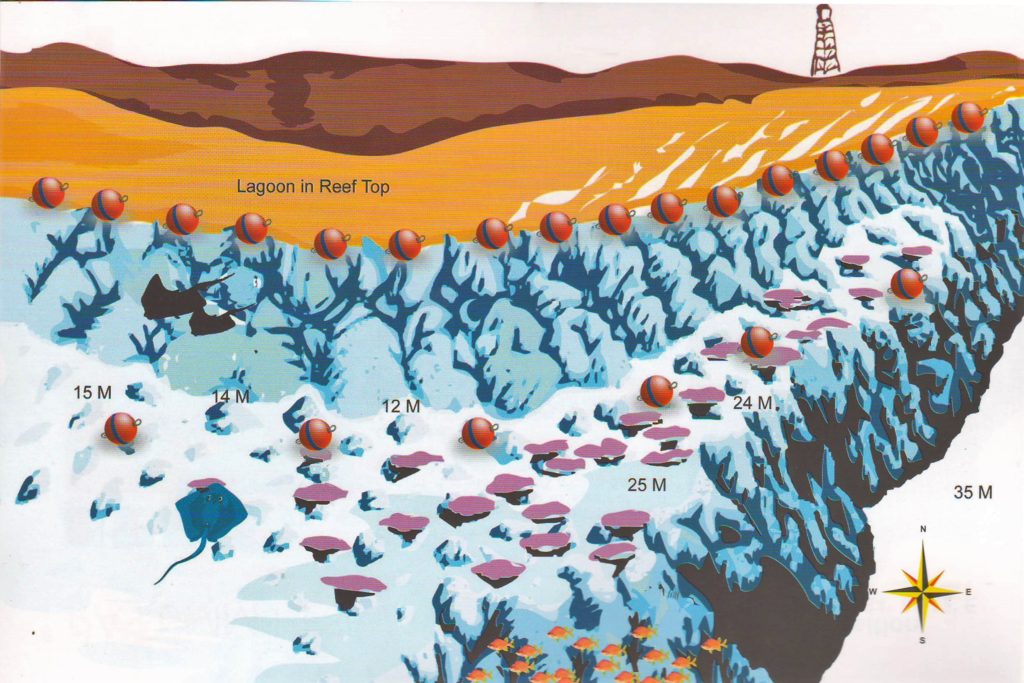 A sloping reef side lands on a sandy slope, dotted with coral blocks, eventually falling off in great depth. Further north, the plank narrows to a ledge that eventually gives way to a vertical wall.
Giant Moray Eels are often seen roaming freely across the plateau and eagle rays pass by. You may find an octopus or squid on the reef slope. Numerous anemones protect families of clownfish across the plateau. Large predators are known to come here, but don’t count on meeting sharks. 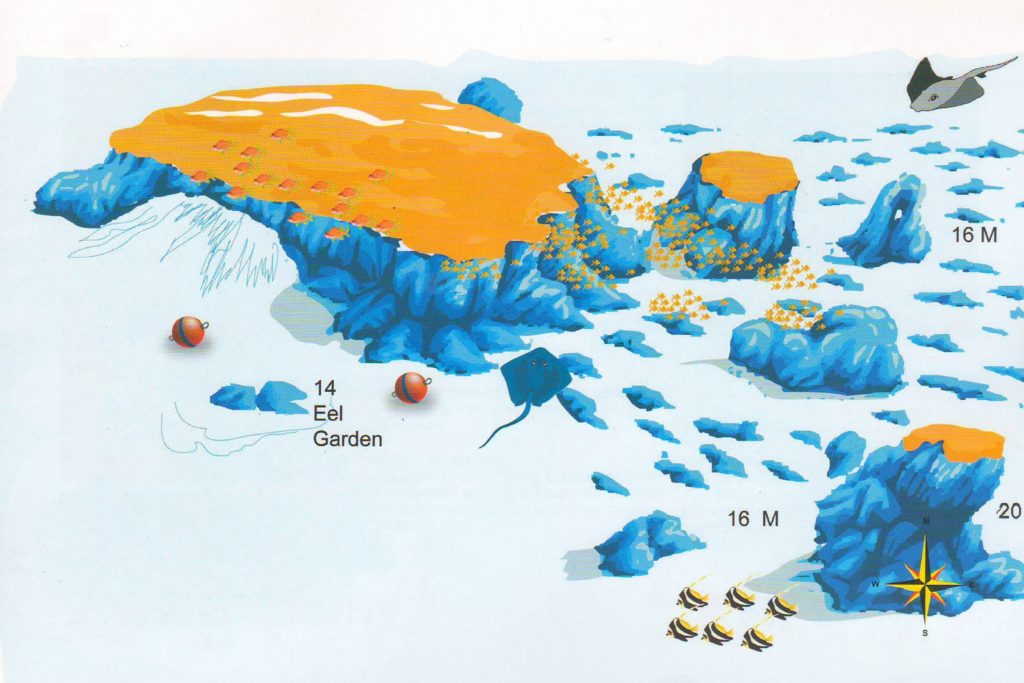 The pinnacles in the south are the most interesting here. They are covered with soft corals and surrounded by an abundance of sea life. On the road that is the closest and the biggest highlight, you will pass garden eels that, at a depth of 14 meters, swing over the seabed.
The pinnacles are draped in schools of coral butterflies, barbels and bass. There are a surprising amount of scorpion fish on the sandy bottom. Batfish also hang out and like to pose for photographers. Lionfish and grouper hunt in cracks full of glass fish.

A 15-meter-high round reef encircles a lagoon that faces west. Three pinnacles run to the north.
A large school of barracudas normally hangs just below the surface. There are big-eyed emperor fish and snappers that circle around the tops. The sharp-eyed diver examining the seagrass may encounter a pair of little dragon fish. Eagle rays and white tip reef sharks are not uncommon, even dugong sightings have been reported here. 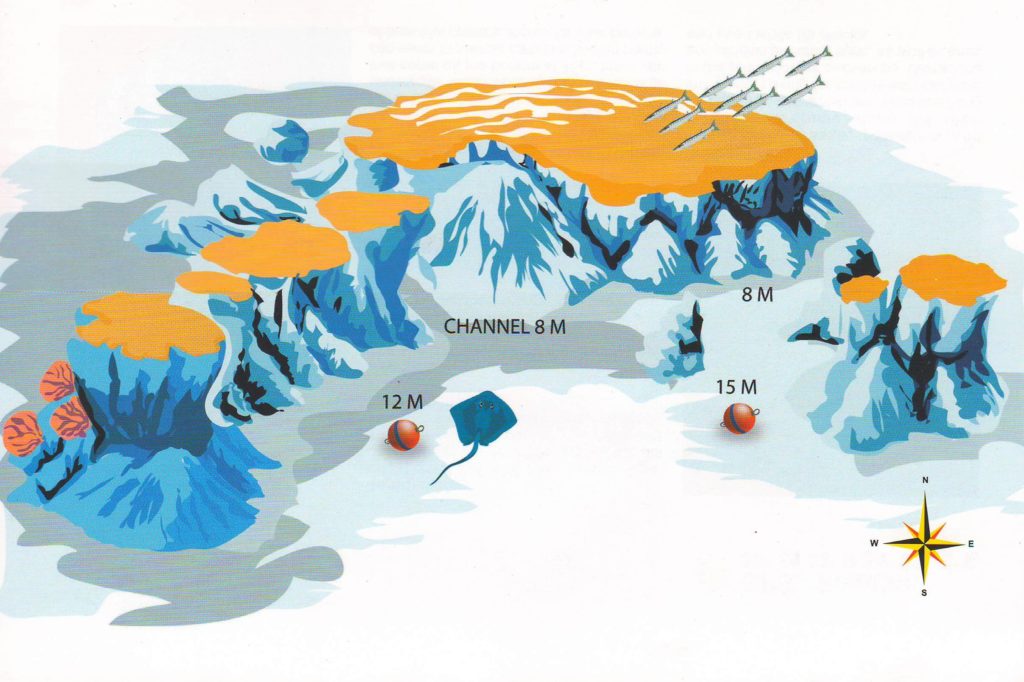 A round reef rises from the bottom at a depth of 10 meters, extended by coral gardens to the east and west, and flows down a slope. A ridge protrudes in a southerly direction, while the bottom descends to a depth of about 15-18 meters.
At the far south side of the peaks there is an overhang with a big gorgonia. Here you can find the longnose hawkfish if you got sharp eyes. Around the reef, especially at the split point, you can find schools of bannerfish and sweetlips. The coral gardens and the top of the reef are populated by colorful trigger fish, parrot fish, tangs, and unicorn fish.